“They tell you to stay in a pack, and there are waves hitting you left and right. We all got neon caps. About 10 minutes in I’m looking everywhere and I see nobody.  I have no choice but to keep going. Another 10 minutes, and a wave hits me and spins me around and they’re all behind me,” 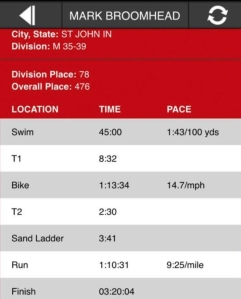 “Out of 2,000 participants — if you take out the Olympians who went to Rio a month or two later —  I was right around the top 100 in the swim portion, and I crushed it in the run… they zipped past me on the bikes, but I caught up to them on the run.”

Overall for the race, the University of Illinois at Chicago College of Dentistry alum ranked in the top 23% — 460th out of 2,000 overall — with his wife Amanda, a Registered Dental Hygienist, and two-year-old daughter Brooklyn cheering him on.

“Not knowing what was really swimming underneath me in the Bay was actually the hardest mental challenge. Jumping into the frigid waters of the Bay (59 degrees on race day) was also very, very difficult. Breathtakingly cold. Almost impossible to train for the conditions on the Bay while living in the Midwest. No sharks or humpback whales to worry about out here,”

“Also, the hilly environment of San Fran for the bike and run portions were extremely difficult compared to the flatlands of the Midwest. I’m glad I didn’t know it was going to be as hard as it was, but it is extremely rewarding to say, ‘I Escaped from Alcatraz,’ and all in the name of charity.”

It’s All For a Cause

Though he participated as an individual in the Escape from Alcatraz Triathlon, Dr. Broomhead contributed in a fundraising capacity as part of #TeamFox, the Michael J. Fox Foundation for Parkinson’s research. The result: he totaled close to $4,500 in donations and earned the rank of No. 1 fundraiser for this charity, for the 2016 race.

“A handful of my patients in my office have Parkinson’s disease. I wanted to do something for the race for charity and was drawn to this. My grandfather was never officially diagnosed but I know he had some form of it, and my grandfather (Francis ‘Buddy’ Broomhead) and I were very, very close,” he said.

Meanwhile… on the Home Front

At his dental practice, Compton and Broomhead Dental Center in Munster, Indiana, Dr. Broomhead and the team there provide a necessary service to patients with Parkinson’s and other illnesses that keep them homebound.

“We have a division in our office called Dental Home Health. If you can’t come into our office, we will go out and see you at your home.  A lot of these patients have diseases like Parkinson’s, Dementia and Alzheimer’s. … we’re bringing care to people who can’t get into our office. We can just bring it to them.”

Quick Tutorial: How to be a Champ like Dr. Broomhead

So, how does an Indiana dentist prepare to:

You just escaped from Alcatraz! What are you going to do now?!

After successfully completing a bucket list adventure, Dr. Broomhead says he’s officially retired from Olympic triathlons. He joked that his idol Michael Jordan came out of retirement a few times.

“There’s always a comeback story … if I’m going to do one I’ll probably do this one again or one in Hawaii.”

One thought on “Swimming with the Sharks: How an Indiana dentist braved the teeth-chattering temps of San Francisco Bay for charity #TeamFox #ie40under40”

Keep up with our daily posts